These days, attending a bachelor or bachelorette party often comes with a hefty price tag and a side of debt. 62% of respondents in a Price4Limo survey said they’ve taken on debt for the occasion. So, does that mean that Americans are really good friends? There’s more to it.

The pressure is on

Between inflation and peer pressure, it’s easy to end up overspending as a wedding guest. If you’re a bridesmaid or groomsman, it’s even easier. Over half of Americans who’ve participated in a bridal party say they’ve felt pressure to spend above what they could afford – especially during bachelor/bachelorette parties, according to a LendingTree survey. Some of that pressure came from the bride, but a lot of it was self-imposed too. And nearly 40% of bridal party members regret spending some of the money they did.

Pro tip: Include all wedding guest-related expenses in your yearly budget. MyCredello can help you stay on track. 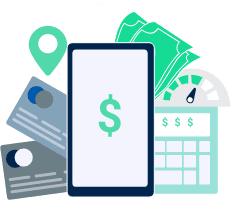 Don't let debt weigh you down

Track all of your accounts in one place so you never miss a payment. Simply connect your accounts and start tracking your debt today.

Track all of your accounts in one place so you never miss a payment. Simply connect your accounts and start tracking your debt today.

Speaking of self-imposed financial pressure, 79% of people in the Price4Limo survey agreed that they should cover the expenses of the bride or groom when traveling for a bachelor or bachelorette party. The ideal length of such a trip, according to the respondents, is three days – enough time to put quite a dent in your wallet. When you consider the fact that 60% of people said they’d rent a party bus and 42% said they would ride in the back of a rented limousine to celebrate in style, it’s not surprising that guests end up pulling their credit card to be able to afford the festivities.

The damage: About $1,500, according to a Savings.com study. The same study revealed that half of recent bachelor/bachelorette party attendees agree that couples should tone down extravagant events due to rising costs.

is the median cost to attend a bachelor or bachelorette party in 2022.

Just because people think it doesn’t mean they will say it though. Some people avoid money convos with friends, which could have led 52% of respondents in the Savings.com study to take on credit card debt to go to a bach party. The financial gap between friends can be tricky to navigate, too: One person’s reasonable budget may be another one’s monthly rent.

Is it okay to decline a bach party invite?

“The location has been picked and I’m in a group of about 13 people. A mansion in the French Quarter, through AirBnB. Turns out that it’s going to be $5,900 for three nights. Now I start to think about the activities…If I’m spending $800 on lodging and plane fare for three days, then I’m going to need to have at least $1,200-$1,600 total just to keep up. That’s not who I am at all and I told the Groom and his brother who I am close with that I just can’t go. When people started adding they wanted to skydive and jet ski I’m like, wondering how?” wrote a Reddit user in a thread about whether it’s okay to decline a bachelor party invite for financial reasons.

People chimed in with reassuring answers: Yes, it’s okay to decline. No, don’t feel bad. And a good friend will absolutely understand.

“Don’t go into debt over a wedding, especially one that’s not even yours. A few years ago I had to miss my best friend’s wedding because I just wasn’t in a good place financially and living across the country. I would have been the best man, and I still wish I could have made it. He understood and we’re still great friends to this day so it’ll be fine,” added another.

People are going to great lengths to host and attend extravagant bachelor and bachelorette parties. But taking on debt to join the fun is just not worth it in the long run. You can make up for it in other ways.

How Can You Get and Read Your Credit Report?

The Top 4 Marriage Money Issues That Lead To Divorce

Drinking this Popular Beverage Before Shopping May Make You Spend More