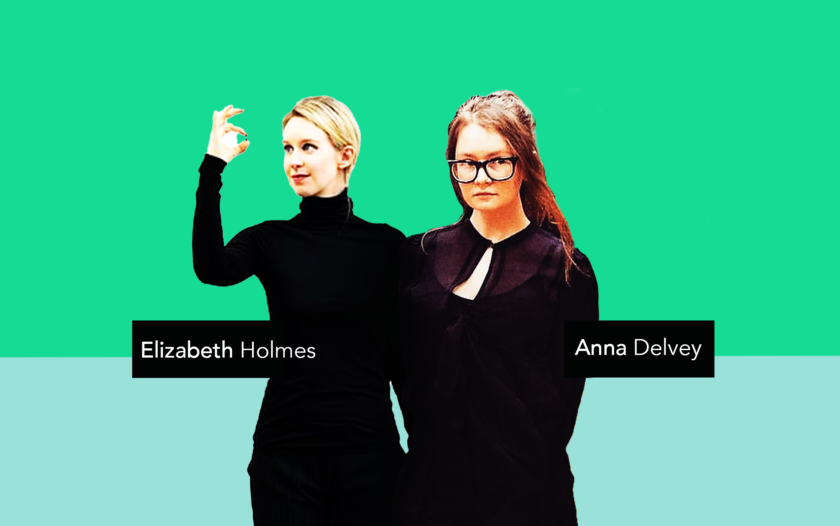 Money scams are the new murder mystery documentaries. Remember when we are all obsessed with the podcast Serial for about 10 minutes? Yes, it was well done and at this point podcasts were still new and shiny, but does an inquisitive voice narrating a murder mystery have anything on a 25-year-old fake German heiress (with a Russian accent) conning New York’s elite out of hundreds of thousands of dollars while wearing stolen Balenciaga? Absolutely not. Nor does a depressing unsolved murder have much on a college dropout who convinced the world she was the Steve Jobs of health tech (complete with a fabricated voice and black turtleneck.) I am, of course, talking about the most discussed women of 2022 and the last five years collectively: Anna Delvey and Elizabeth Holmes.

Scam artists or simply too confident?

Both of these women have been labeled scammers and fraudsters as well as fashion icons, girlbosses, liars, and, of course, whack jobs. Both of their stories have now produced must-watch television series, countless articles, books, GIFs, memes, SNL skits, and launched careers (hello Rachel DeLoache Williams ) And if you aren’t familiar with their stories because you somehow missed the multiple articles, books and don’t enjoy binge-watching series then check out these links on Delvey and Holmes.

Holmes, who faces up to 80 years in prison for the four counts that led to a conviction in her federal fraud trial, is inching past Delvey in terms of cinematic fodder (though the Chloe Fineman/Anna Delvey SNL sketch this month was quite priceless) in that she has a full-length feature film coming out this fall, as well as a Hulu series, “The Dropout”, with Amanda Seyfried currently streaming. Delvey, who is already serving her sentence, does not get to watch her popular Netflix series “Inventing Anna” but the rights to her story ($250,000) did help pay off some of her monstrous legal expenses.

Delvey and Holmes, whose stories came to light in 2017 and 2015 respectively, are now being dissected on a different level as they hold the world’s attention once again with their palatable series. And how could they not be? Scams of epic proportions! Duping hordes of yuppie social climbing Millennials into thinking you are a unicorn! Fooling legitimate lawyers and investors using Kevin McCallister-type methods! Holmes’s story, though not quite as glamorous, is also epic as she was risking people’s lives to live up to the hype of being labeled the next big titan in Silicon Valley. But like Delvey, she also had a weakness for PJs, yachting and jet setting in general.

Anna Delvey and Elizabeth Holmes broke all the money taboos

Now their truths are compared to the glam Netflixified-versions — the Shonda Rhimes led team behind “Inventing Anna” starts each episode with a disclaimer that many of the events depicted are absolute fiction — but the same question has always been at the root of our fascination. Why do these women want so much money? Now we never questioned why Charles Ponzi wanted all that money or Jordan Belfort or even Billy McFarland but we do find it somewhat bewildering that these women were so ambitious about getting money.

Or perhaps the real reason we are so intrigued by these women is how comfortable they are with money. Their unabashed confidence was that not only did they deserve this money, but that it was their God-given right to have this money. Holmes had wanted to be a billionaire since she was a child, and she would do anything to achieve that status.

Delvey and Holmes go against what most women are taught about money. Even in the year 2022, some women still consider the topic of money to be taboo. A recent survey of 1000 parents found that girls are more likely to be taught about financial restraint by their parents while boys are coached on how to build wealth. The study also found that girls receive less money from their parents in general. Not a bad lesson if they are trying to represent the wage gap these girls will face when they enter the workforce, but sometimes it is amazing we don’t have more Anna Delveys and Elizabeth Holmes running around trying to steal it.

That relationship with money follows women right into adulthood as one study found that women dislike talking about money so much that they would rather discuss their partner’s sexual inadequacies (with said partner.) Another report found that over 60% of women think their own death is a more fun topic than their finances. “All the research shows there is a confidence gap for women, even though they have made so much progress in other areas of their lives,” said Kathleen Murphy, president of Personal Investing at Fidelity.

It should also be pointed out that even when it comes to committing white collar crimes, women still face a glass ceiling (so let’s add trailblazers in crime to Delvey and Holmes’s resumes.) Women who commit these types of crimes usually hold lower positions at corporations, have a less prominent position in the fraud ring and they don’t even get the same financial compensation as their male accomplices. “Ocean’s 8” was an absolute fantasy.

It should be emphasized that this is in no way an essay to encourage women to take cues from Delvey and Holmes. They broke the law, committed terrible crimes, put people’s lives at risk (Holmes more than Delvey), and, it can be argued, suffer from delusions of grandeur and may have sociopathic tendencies. But what we can take from them is their confidence, to an extent, when it came to deserving money and talking about money.

So how can we as non-fake German heiresses and deep voiced CEOs get better about talking about money and own our worth?

Financial advisor Kristin O’Keeffe Merrick told Coveteur, “Imagine you treated your money like you treated your best friend. Now is the time to start. Pay attention to it, go on dates with it (this means check your bank accounts, track your spending, and start making good decisions). Prioritize your money, and prioritize your financial hygiene. Also, stop comparing yourself to others. Trust me, no one is as financially secure and savvy as they would like you to believe.”

BNPL Scams are Everywhere: Here’s What an Expert Says to Look Out For

This Mother-Daughter Duo Pulled an $850,000 Credit Card Scam. Is this common?