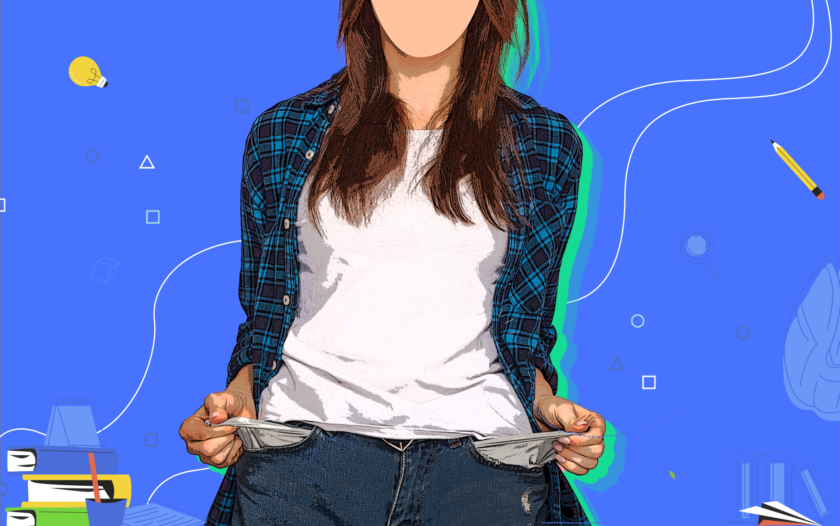 Taking out a student loan to pay for your degree is a way paved with good intention, but what happens when things spiral out of control? Borrowing money to fund your education is supposed to be a pathway forward, but high interest rates combined with the inability to find a suitable salary post-graduation can lead to financial ruin.

Why is student debt so scary?

Getting out of debt of any kind can be overwhelming, but the stress of paying off student loans can be downright horrific. Student loan debt is the second highest form of outstanding debt in the U.S. behind mortgage debt, so it’s incredibly common, but often difficult to navigate. In 2020, a LendEDU study found that 32% of people in the U.S. who file for Chapter 7 bankruptcy have student loan debt, and within that group, student loan debt accounts for 49% of a borrower’s total debt on average.

Sometimes though, a haunted tale of student loan debt gone haywire looks less like bankruptcy and more like staggering impacts to a person’s career and relationships. These student loan debt horror stories offer some scary insight into the frightening reality of life after graduation for so many. Get a glimpse of just how spooky things can get for students just trying to survive, but also see how some borrowers have turned even the most horrific of tales into fuel for a future that’s almost as sweet as a bucket full of candy.

Student debt can be overwhelming but it doesn’t’ have to be. Consider debt consolidation.

How monster mistakes, a lack of mentorship, and deferred payments can derail dreams.

Publicist and freelance journalist Alexia McKay says that her current student loan debt totals about $19,400. Despite earning scholarships, she still applied for loans to cover additional expenses for school. “I believe my mistake was applying for more than I needed, thus building unnecessary debt,” she explains. McKay says that post-graduation, there have been times where she’s struggled to pay the monthly balance of her loans and as a result has had to defer her loans several times, resulting in hundreds of dollars of accrued interest.

McKay wishes she had known more about the differences between subsidized and unsubsidized loans while in school, learned how to better manage student loan debt with budgeting, and maximized her free time to make extra cash. She believes that mentorship through the student loan process could have helped her take personal responsibility for her debt and learn more about how to successfully pay down debt.

“For example, in college my friends and I would blow through our refund checks (net checks) we received each semester. Some of us would get as much as $5K up to $10K in refunds. We would use that money to go shopping, travel, etc,” McKay says. “Looking back, I would instead advise students to save that money, if they are able to. Put it in a savings account, use it to put down a payment on a house or a car or towards your student loan.”

Today, McKay seeks to become a first-time home buyer, but the spooky shadow of her student loan debt still looms large, standing in the way of this goal. “When I was younger, in my 20s, I was very careless with my finances, including how I paid on my loans,” she explains. “And those are mistakes I am still working to amend.”

How student loan debt can stack up despite a spine-chilling amount of work.

Dr. Karen Panetta, a fellow of the National Academy of Inventors, says she would have never been able to attend college without loans. She also worked two jobs to try to make ends meet as a student. “I worked the 11 p.m. to 7 a.m. shift making sandwiches in a convenience store underneath the famous Citgo sign in Kenmore Square in Boston. At 8 a.m. I would go straight to classes and labs. I also worked on the weekends in a cleaner’s emptying pockets and tagging peoples’ dirty clothes,” she says. “I found needles, drugs, and other dangerous bodily fluids. It was gross and hard work. I even had an irate customer throw a coat at me and the belt buckle hit me in the eye. It was a miserable time in my life.”

Though Panetta says she didn’t saddle herself with more debt than necessary to get through school, the restrictions placed on her ability to receive aid as a student created even more of an uphill battle. “What hurt was if I received any academic scholarships, the school reduced my financial aid so I could never get a leg up and was always struggling,” she explains.

When Panetta graduated, she was able to pay off her undergraduate loans within five years thanks to what she calls a “great job,” but her experience as a struggling student has stuck with her for years. Though she worked for a company who paid for her MS and PhD degrees without having to take on any additional debt, she was only able to be a part-time student throughout that time. She says this is “a long hard road,” noting that “most graduate advisers don’t want to take on part-time students.”

Today, Panetta serves as a Professor of Electrical and Computer Engineering and Dean of Graduate Education for the School of Engineering at Tufts University. Her first-hand experience has shaped the way she views the higher education system regarding student loan debt. “The average student in the U.S. gets out with an average of $25,000 debt,” Panetta says. “This is detracting low-income and underrepresented groups from going on to graduate programs because we need to work to pay off debt and couldn’t afford to take on more debt.”

have a combined $1.75 trillion in student loan debt in the U.S.

Sam Johnson’s foray into student loan debt started with a simple decision: To borrow or not to borrow? Though he says he initially struggled with the choice to take on debt, he took the plunge when he was accepted into the MBA program at the Crummer Graduate School of Business at Rollins College in Florida in 2015. “I took out enough loans to cover my essential expenses and afford the program’s costs, but I knew it was a long-term investment,” he says.

Post-graduation, Johnson recalls “facing mounting payments” for his student loans, which drove him to connect with a former co-worker to secure stable employment. Like so many others though, Johnson was let go from his long-held position when the COVID-19 pandemic hit.

“By then, thankfully, student loan repayments had been temporarily paused, but I suddenly found myself without any reliable source of income,” Johnson says. “My girlfriend (now wife!) and I had just renewed the lease on our apartment. It put a significant strain on our relationship, which we were luckily able to navigate together, but I was also suddenly forced to face the dilemma of finding a new career path in the midst of a pandemic — all while being unable to make any dent in the outstanding balance of my student loans.”

The repayment pause helped Johnson navigate the trials of the pandemic and gave him time to find a new role as Editor-In-Chief of Otter PR, but he’s still not looking forward to payments restarting in 2023. Though Johnson says he avoided “some of the more predatory lending practices out there,” he still laments the focus of the U.S. education system on prioritizing profit over people, citing the “long-term financial entrapment,” the system sets up. “So many people with student loan debt in the U.S. just wish they had known more about what they were signing up for and getting themselves into, not just at the time they took on student loan debt, but how it would impact their life, career, and relationships for decades to come,” he says.

Johnson’s advice for avoiding the horrors of student loan debt? Beware of scams that will take advantage of your need for cash to pay down debt and always read the fine print. “If a deal ever sounds too good to be true, that’s because it is. Don’t fall victim to a potential scam just because you’re in need of cash. There’s always another way to make more money, but there’s rarely another way to get yourself out of immense debt.”

How student loan debt scared one couple into successfully saving for their future.

The experience of repaying student loans can be fraught with such hardship that it can impact not only your own future, but the future of your family for years to come. That’s exactly what happened to Patricia Roberts.

“The $100,000+ student loan debt that I and my husband had accumulated while pursuing our undergraduate and graduate degrees (even while working multiple jobs as undergrads and attending graduate school at night) was the driving force behind our strong desire to begin to save for our son’s future education soon after he was born,” Roberts says. “We could not bear the thought of subjecting our child to the level of financial stress we experienced as first-generation college students and in paying back a tremendous amount of student debt over 20 years.”

Roberts’ vision of a debt-free degree for her son inspired her and her husband to budget mindfully in order to keep up with their own student loan payments, all the while direct-depositing small amounts from their paychecks into a 529 college savings plan for their son. Though the journey was long, they paid off their student loans as their son entered high school in 2013 and celebrated his debt-free graduation from college in June 2021.

To help others prepare for higher education costs and avoid the crushing weight of student loan debt, Roberts wrote Route 529: A Parent’s Guide to Saving for College and Career Training with 529 Plans. Now, as Chief Operating Officer at Gift of College, Inc., Roberts’ mission is to encourage employers to help employees repay student loan debt and to save for college to avoid or minimize it. “My personal experience with student loan debt has had a significant impact on the efforts I undertake to help others avoid it,” Roberts says.

How to Consolidate Student Loan Debt

The Top 7 Tools to Make a Dent in Your Debt