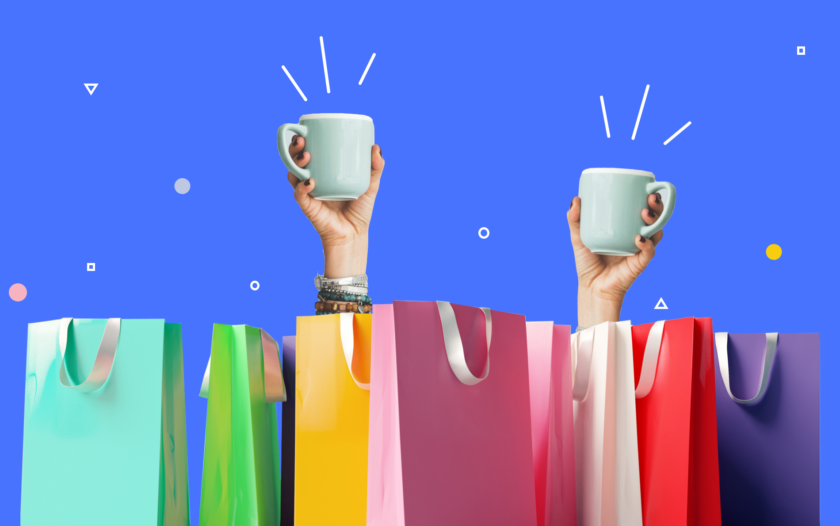 There is a reason why there are often coffee shops inside department stores or complimentary espresso when you walk into a boutique. It seems that the caffeine boost from coffee encourages people to spend more money throughout the store.

An international study led by the University of South Florida found that caffeine can have an impact on what you buy and how much you spend while shopping. Researchers set up an espresso machine at the entrances of stores in France and Spain. More than 300 patrons got a complimentary cup when they entered the store: half got one with caffeine, and the other half got decaf or water. Those that drank caffeinated coffee spent 50% more money and bought 30% more items than those that drank decaf. Caffeine not only made people spend more but also influenced what they bought. Those that drank caffeine purchased more non-essential items than those that drank decaf.

The lead author in the study, Dipayan Biswas explained, “caffeine, as a powerful stimulant, releases dopamine in the brain, which excites the mind and the body. This leads to a higher energetic state, which in turn enhances impulsivity and decreases self-control. As a result, caffeine intake leads to shopping impulsivity in terms of a higher number of items purchased and greater spending.”

If shopping has gotten the best of you and you need some help paying off high-interest credit cards, consider a personal loan for debt consolidation. These loans can get you the money you need in as little as a day and can get you on the path to becoming debt-free.

We found 7 options for your requirement

Credello receives compensation from lenders and other providers of various products featured on this site. The compensation Credello receives does not influence a consumer’s ‘Match Score’ calculation, but it may influence how offers are ranked. The calculation of the ‘Match Score’ shown with some product listings is based on information provided by the consumer along with which lenders and/or products match the provided information. To maintain transparency, any product ranking influenced by compensation is called out as “promoted” or “sponsored.” To learn more about our recommendations and reviews, as well as how Credello makes money, read our full advertiser disclosure

How dopamine can fuel shopping addictions?

Caffeine releases dopamine in the brain when consumed, and this excites the mind and body. Dopamine is a “feel good” neurotransmitter that gets released through a variety of pleasurable activities. Dopamine plays a role in addiction, and shopping already produces it. When you add in caffeine before shopping, you are more likely to feel the effects of a dopamine rush, like impulsivity and lower self-control. If you are struggling to get your spending under control, think about the role that dopamine plays in your shopping experience.

What about online shopping?

The study also found that drinking caffeinated coffee while online shopping leads to higher impulsivity. They took 200 business school students and gave them some caffeinated and some decaf coffee. Each person had to pick items to purchase from a preselected list of 66 items, and researchers found those who drank caffeine were more likely to choose purchases that are deemed impulsive, while those that drank decaf opted for the more practical choices.

Online shopping allows you to purchase anything you want at the click of a button, so more impulsivity is not a good thing. Try to avoid going on Amazon while you are drinking your daily cup of coffee and think about what you need.

What this means for you?

This fascinating study does not mean that you can never grab a cup of coffee while out shopping again, but it is important to keep in mind. Now that you know, you can opt for healthier alternatives, or just be cognizant of the effects of caffeine and stick to a predetermined list when you go shopping.

If you love the taste of coffee, feel free to drink a cup of decaf before or during your shopping. It appears the caffeine boost that coffee brings you is what contributes to the impulsivity when shopping, not the coffee itself. Decaf coffee can scratch that itch while keeping spending under control. A healthy alternative to coffee would be a green juice or smoothie, which provides you with a variety of nutrients and is enjoyable to drink, but does not contain the caffeine that you are looking to avoid.

If you are anything like us, you love a cold brew from Starbucks before you hit the mall. However, you might want to skip that if you want to keep your spending under control. When going shopping, make sure you know exactly what you need and how much you feel comfortable spending so you do not walk away with a bunch of items that you do not need and an overstretched budget.

8 Things To Look Out For With Holiday Shopping Scams

The No.1 Mistake You’ve Been Making When Booking Flights is Costing You Tons