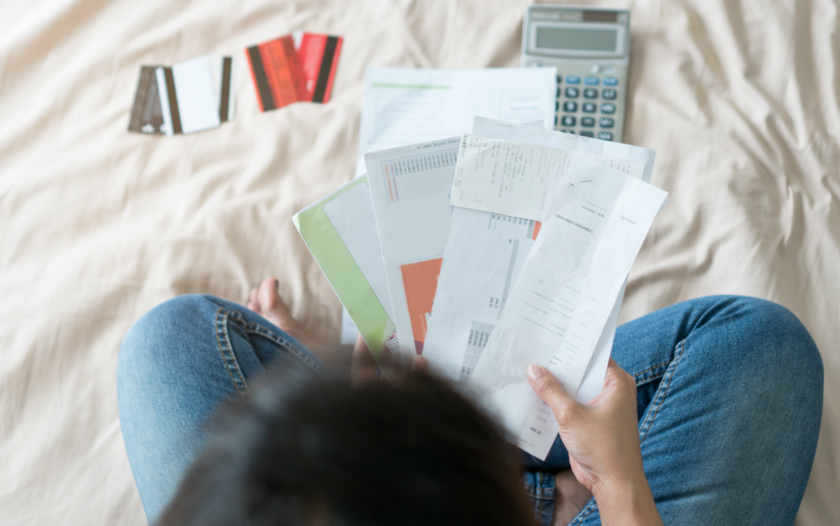 If you’re swimming in debt and feel so overwhelmed you don’t even know where to start with repaying what you owe, you’ve probably wondered which debt to pay off first.

Depending on your ultimate financial goal, you might take a different approach to what bills or debt you’ll start paying off first. If you want to raise your credit score, for instance, your debt repayment strategy will be different than if you want to become debt-free faster.

How to Determine Which Loan to Pay Off First

Before you determine which debt to pay off first, you’ll need to decide which strategy you’re going to implement, whether that’s the debt snowball method, debt avalanche method, or a hybrid approach. Once you know which tactic will work best with you, that will reveal what you should pay off first.

The debt snowball method, popularized by a 60-year-old straight, cis, white, Evangelical Christian man (no, not your dad), is when you throw as much money as you can at your smallest debt balance, regardless of interest rate, while paying the minimum amount due on all your other debts.

The thinking with this method is that despite paying more interest in the long haul, you’ll likely get motivation from small victories along the way that will keep you on track toward paying off your debt.

Let’s say you have four loans or credit cards with the following APRs: 6%, 11%, 16%, and 21%. You’d start with the debt that has a 21% APR, putting as much money as you can afford toward that balance, while paying the minimum on every other debt. Then you’d work your way down to the loan with a 6% APR until you’re completely debt-free.

With the debt avalanche method, the goal is to save as much money as possible. But it’s not necessarily a good fit if you don’t have a lot of extra dough laying around to put even more money toward your high-interest debt. Not to mention, if the balance is particularly large, you might feel like you’re going nowhere fast.

If paying off your debt by balance or interest rate like with the debt snowball and debt avalanche approaches doesn’t sound like the best fit for you, you can kind of hack the system and try a hybrid debt payoff method:

What Order Should You Pay Off Your Credit Cards?

What a segue, am I right? Credit cards are the most common form of revolving debt, which means you don’t owe a set amount every month like you would with an installment loan. Instead, the amount you owe, or your minimum monthly payment, will change as you pay off and take on more debt.

If you’re only dealing with credit card debt and don’t have other loans mixed in, well, good for you. But also, this could impact which approach you choose. If you have multiple credit cards, the difference in your annual percentage rates (APRs) might be negligible, in which case you might want to think about paying off either your highest balance first and working your way toward the card with the lowest balance, or vice versa.

Should you pay off your highest credit card balance first?

If you have enough saved up in an emergency fund and won’t need to deplete savings to pay off debt—something you don’t want to do—paying off your highest credit card balance first could be in your best interest. See what I did there?

Should you pay off small credit card balances first?

Paying off your smallest credit card first could be your best approach if you don’t have a ton saved up and you need to chip away at your debt with the snowball method.

How to Best Pay Off Debt

There’s no one-size-fits-all best way to pay off debt. The best approach will differ from person to person, but ultimately, it’s whatever strategy actually works for you. If you’re motivated by the small wins involved with the debt snowball method and that keeps your momentum going, then snowball it up. If saving money on interest in the long term with the debt avalanche approach helps you stay on task, then maybe that’s your best bet.

FAQs About Which Loan to Pay Off First

Is it better to pay off small loans first?

Not necessarily. While the psychological implications of paying off small loans first are great, you could be forfeiting more money toward interest payments down the road.

Is it better to pay off one loan at a time?

Generally speaking, no. You should almost always pay at least the monthly minimum on all your debts to avoid tacking on late fees and further compiling interest.

Should you pay off old debt or new debt first?

If an old debt has reached collections, you’ll probably want to pay that first, assuming the statute of limitations hasn’t passed. The statute of limitations can vary from state to state and by type of debt, but generally it’s about three to 15 years. Benefits of paying off old debt include decreasing your debt-to-income ratio, eliminating unpaid collections that could negatively influence your credit score, and a higher likelihood of getting approved for new credit in the future.

Should you pay off loan or credit card first?

Usually, credit cards have higher interest rates than personal loans and other installment loans, so if you’re more concerned with paying off the highest interest rate first, you’ll probably prioritize paying off a credit card. If it’s a secured loan, meaning you’ve put up collateral, you’ll want to pay that off first to avoid losing your car, house, savings, etc.

Should you pay off high-interest loans first?

If you’re more concerned with limiting the amount of interest you owe overall, you should pay off high-interest loans first. In other words, use the debt avalanche method.

Should you pay off your credit card or car loan first?

What debt to pay off first to raise your credit score?

Need to Borrow Money? Here’s How