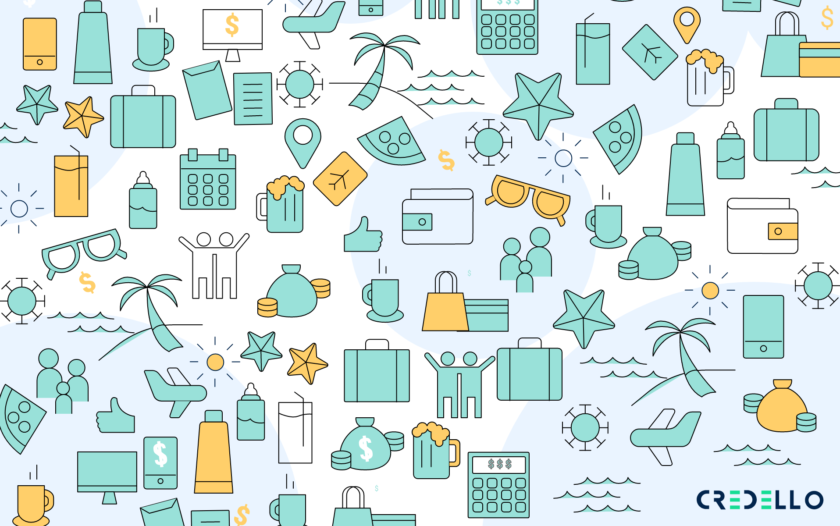 Millennials love traveling more than they love posting photos of their meals on Instagram. Posting photos of a meal that they’re about to eat while on a trip? Fuhgeddaboudit.

Prepare for your feed to be full of that this summer as folks have spent the past 15 months building up their airline miles and stashing away cash. They’re eager to take to the skies and hit the road for summer travel 2021.

And if they haven’t prepared financially for a getaway, that likely won’t stop them. Let’s just say millennials know a lot more about going into summer travel debt than they do about filing their taxes.

Watch out world: the millennials are coming

In a Credello summer travel survey of 500 American millennials—a.k.a. people ages 25-40—63% said they’re planning to travel during ‘Shot Girl Summer,’ or whatever we’re calling the Summer of 2021. 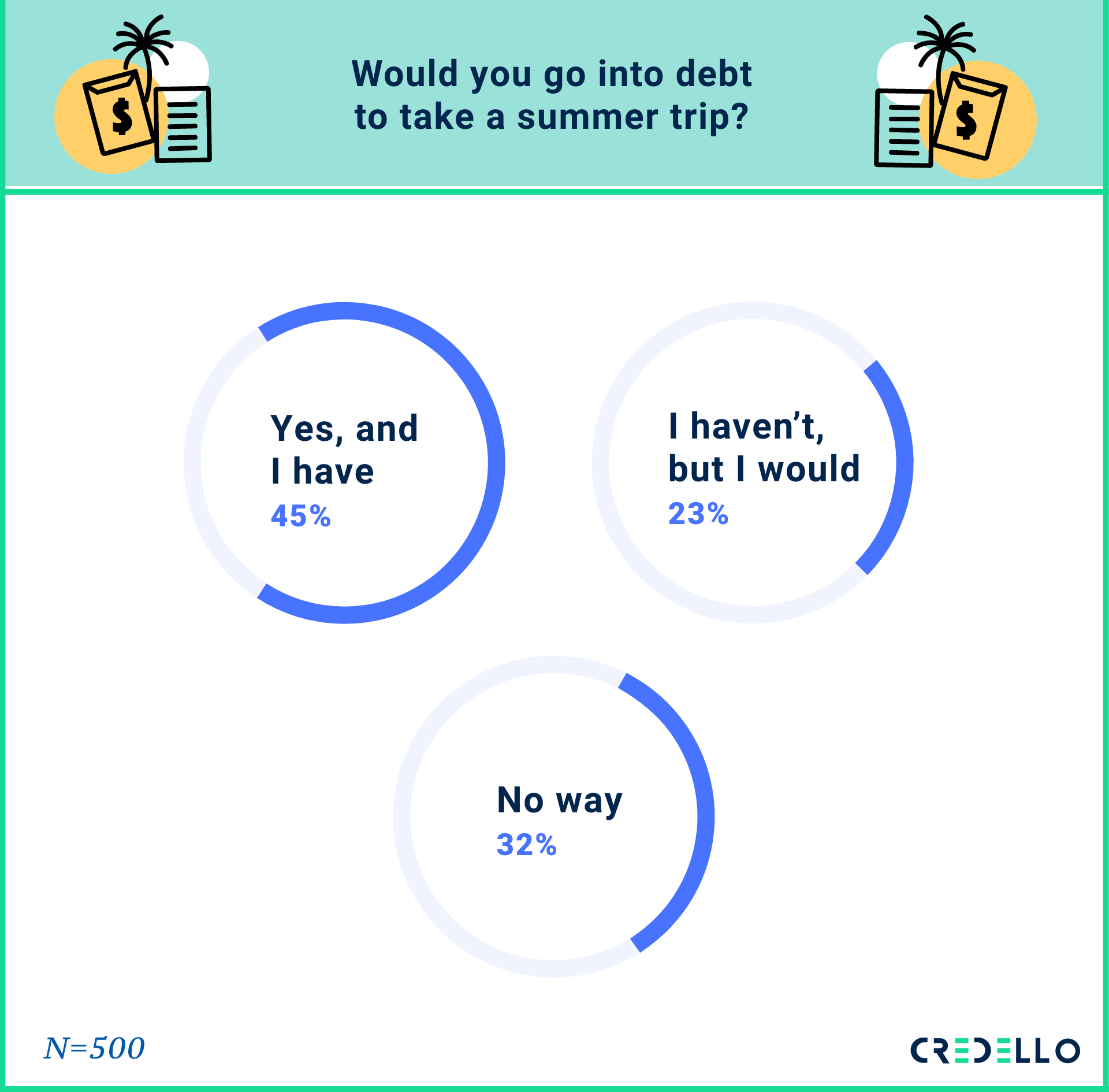 Despite a devastating year-plus because of COVID-19—which has led to the death of more than 600,000 Americans, unprecedented job loss, and the worst blow to the global economy since World War II— these numbers are not all that different from the pre-pandemic travel and debt figures among millennials.

In fact, a majority of Credello survey respondents say they’re more likely or just as likely to book travel post-COVID, even if it puts them in debt. More than 58% said more likely, 35% said just as likely, and just 7% said less likely. 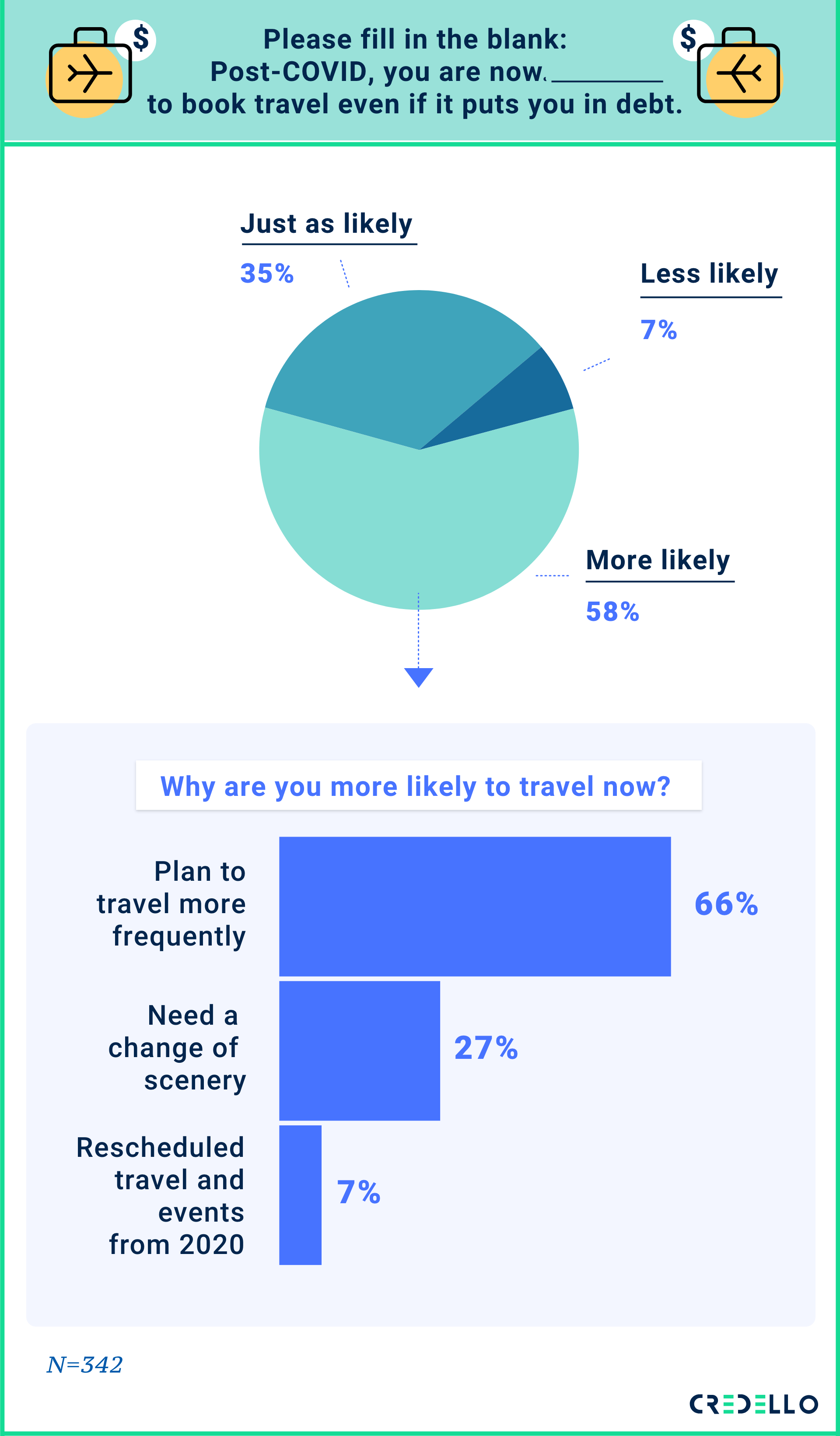 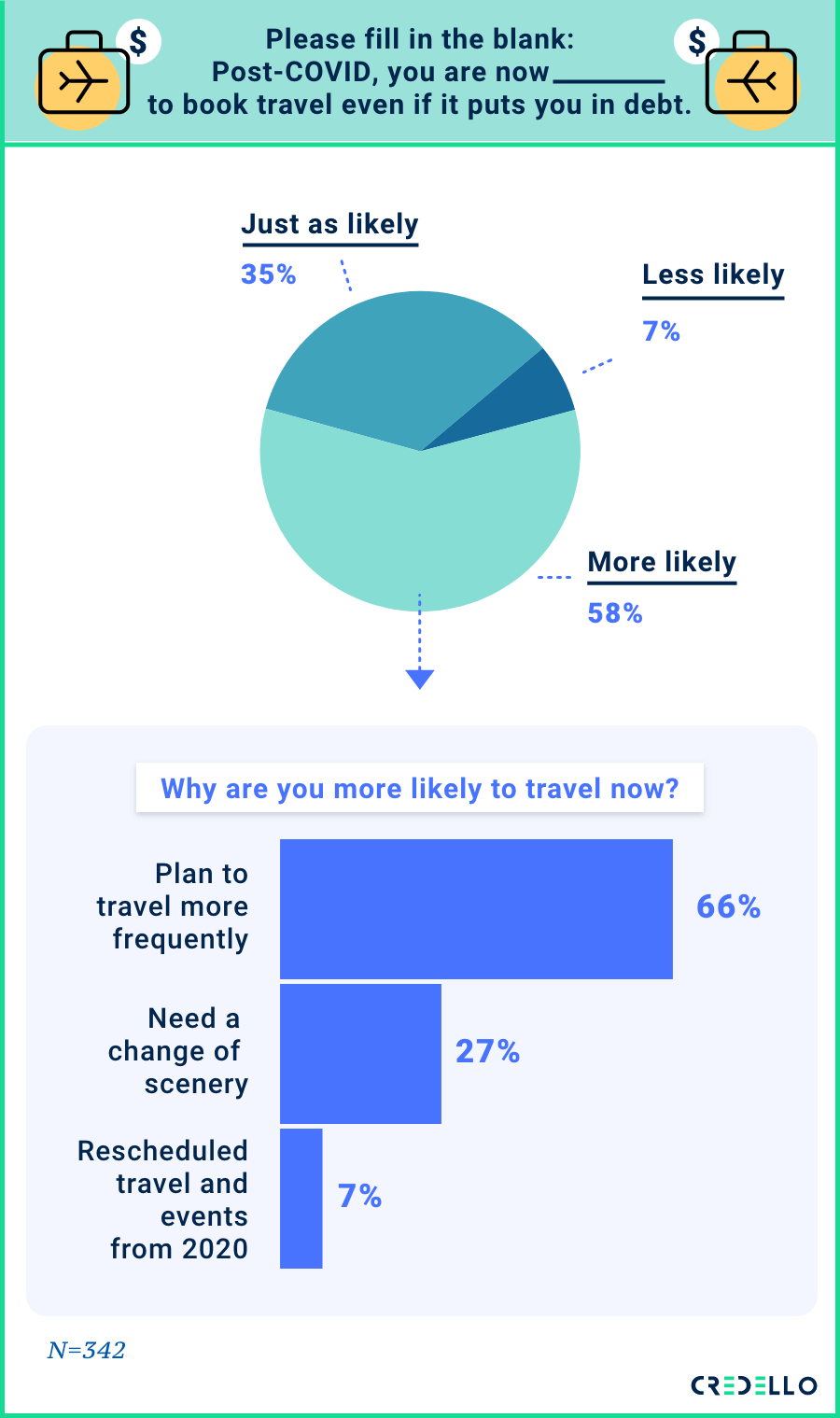 How much debt are millennials willing to go into to travel?

Debt exists on a spectrum. There’s good debt and bad debt, and certainly the amount of existing debt you have is a big ol’ factor in how much you’re willing to take on. 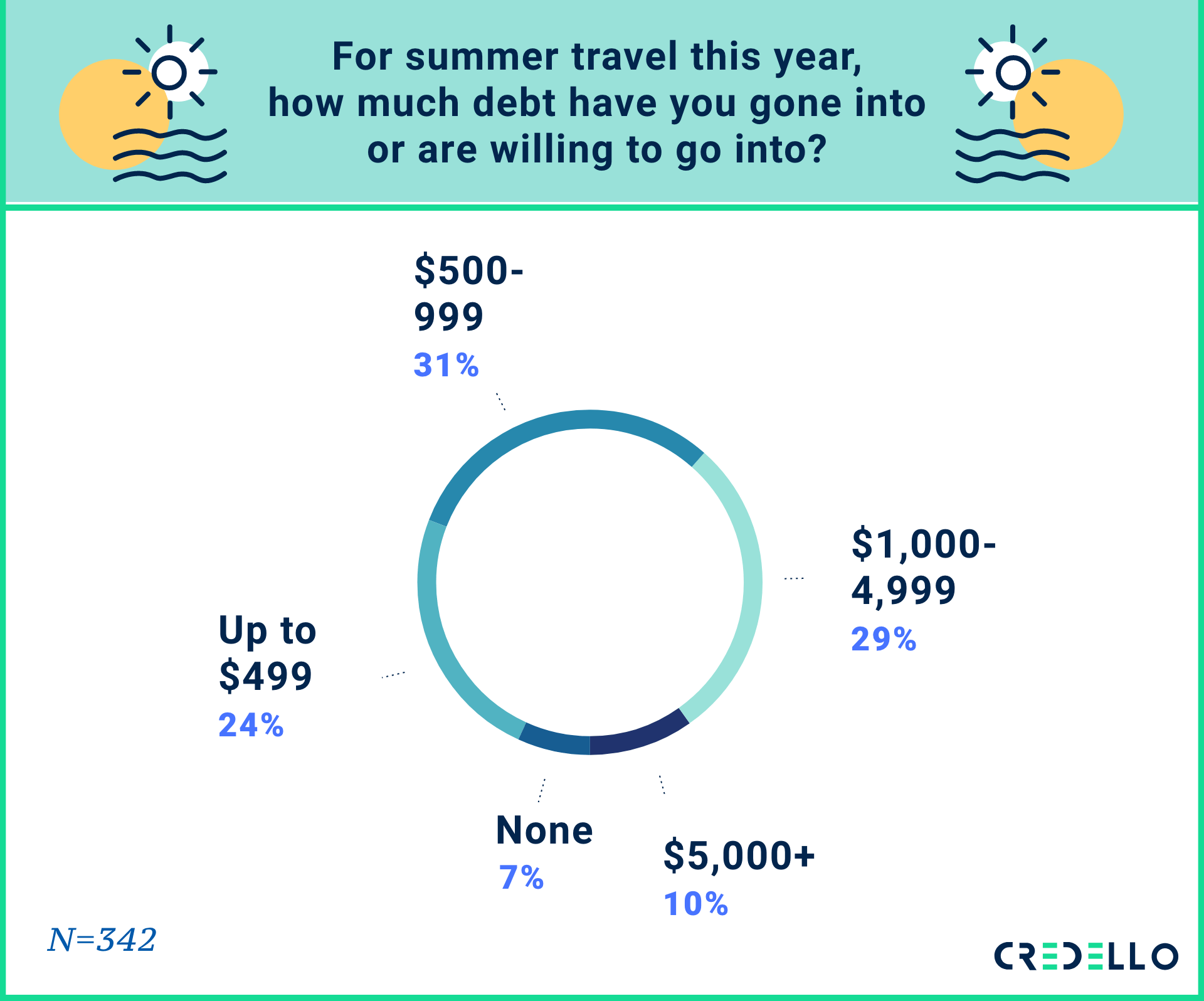 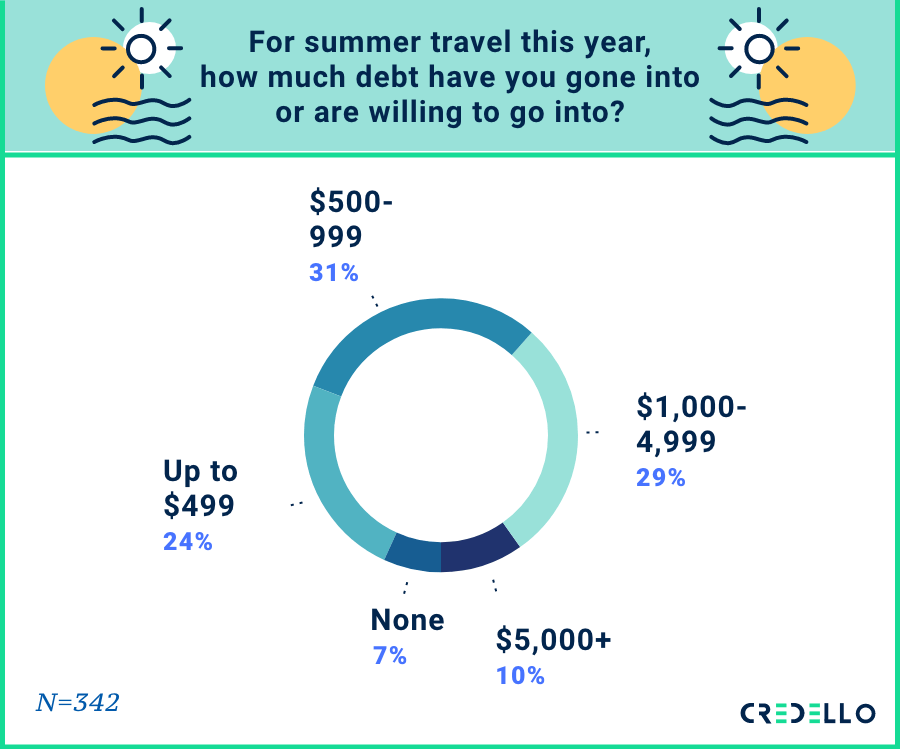 Why are millennials going into debt to travel?

People’s top reasons for taking on debt to travel can be broken into three simple categories:

That’s to say that 31% of respondents justified going into debt to travel because YOLO!, while another 31% wanted a change of scenery after COVID-19, and another 30% said they work hard and deserve it. 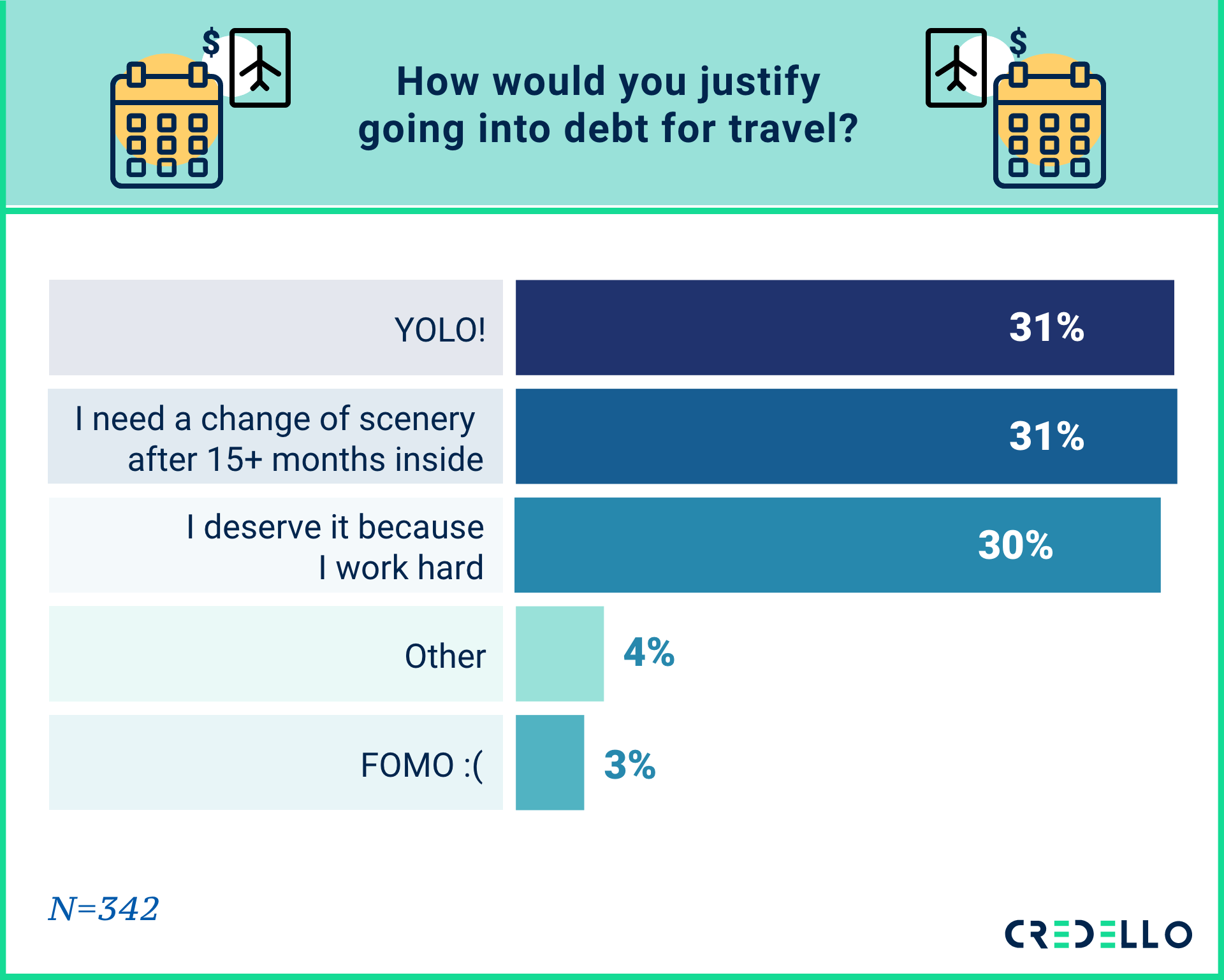 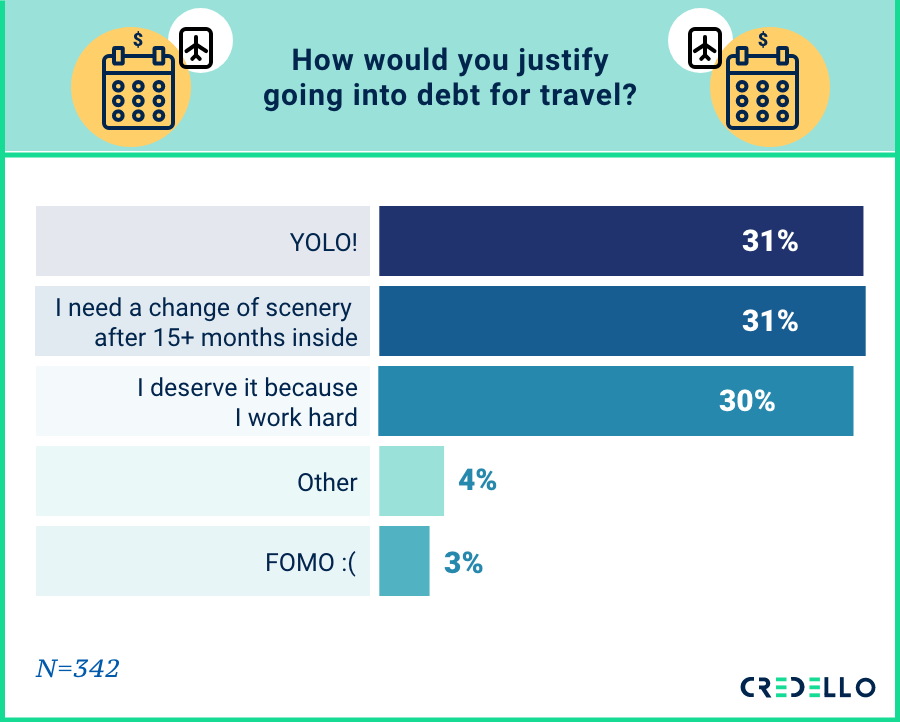 Those figures aren’t all that different from 2019’s Credit Karma survey, sans pandemic. The same percentage (31%) said YOLO!, while 25% were singing Donna Summer’s tune about their hard-earned money.

Where are they going for summer travel in 2021?

Most millennials aren’t going far: More than 41% of respondents said they would only fly within the U.S., while another 35% say they’d only travel to drivable destinations for the day or weekend. (That means more than three-quarters of respondents want to travel but don’t want to leave the country. Only 5% are not planning to travel at all.) FWIW, 19% said “the farther, the better.” Ramble on, wanderlusters.

In theory, the closer you stay to home, the less debt you’ll accrue. 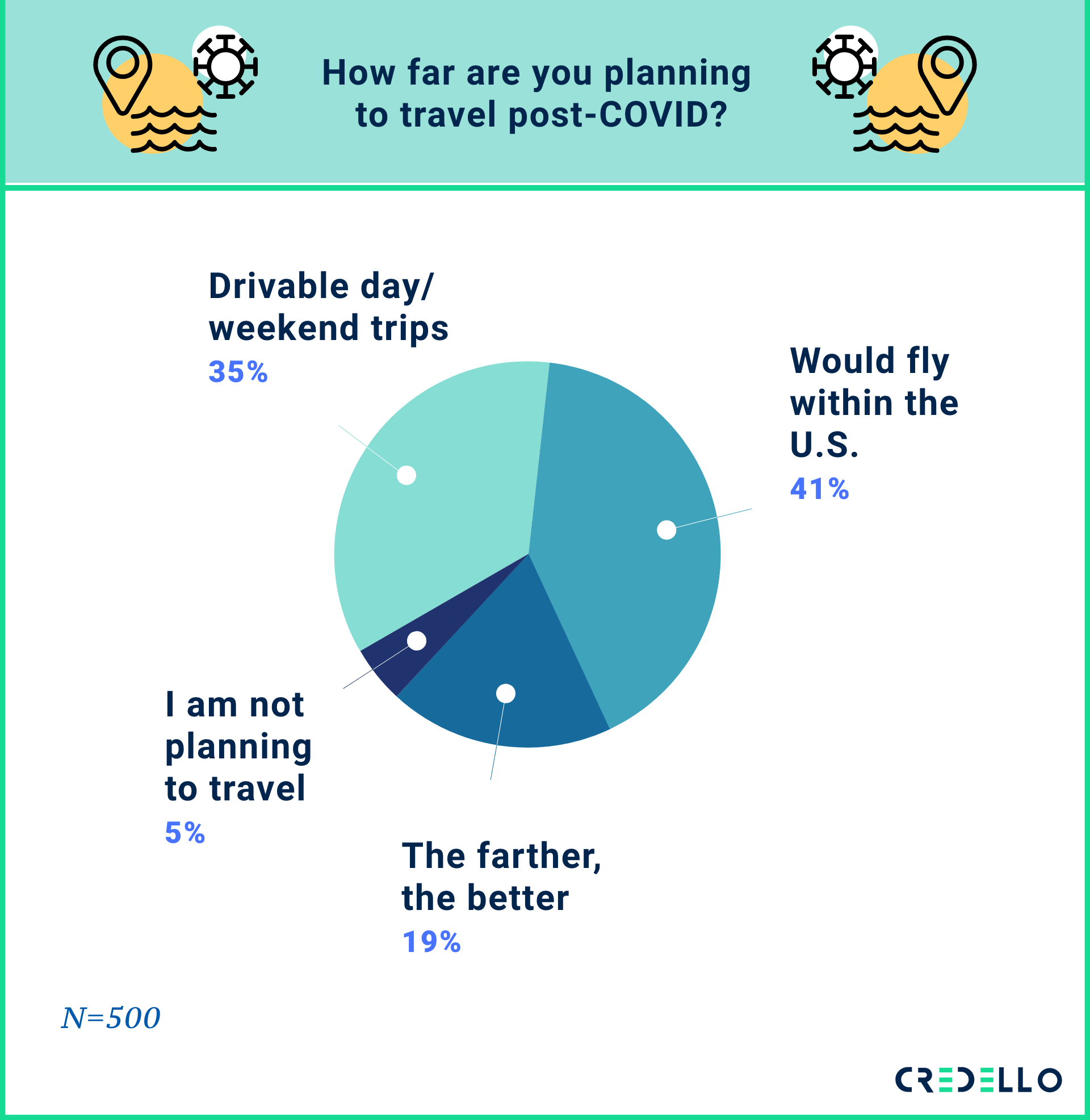 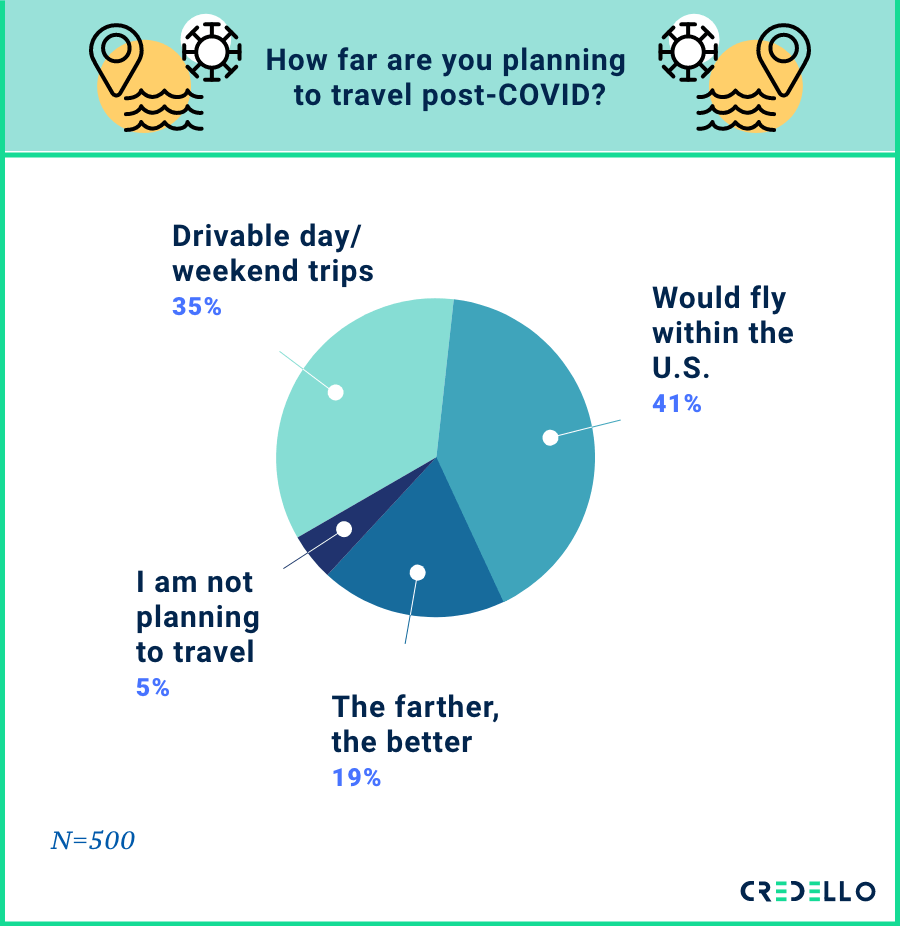 What types of trips are they willing to go into debt for? 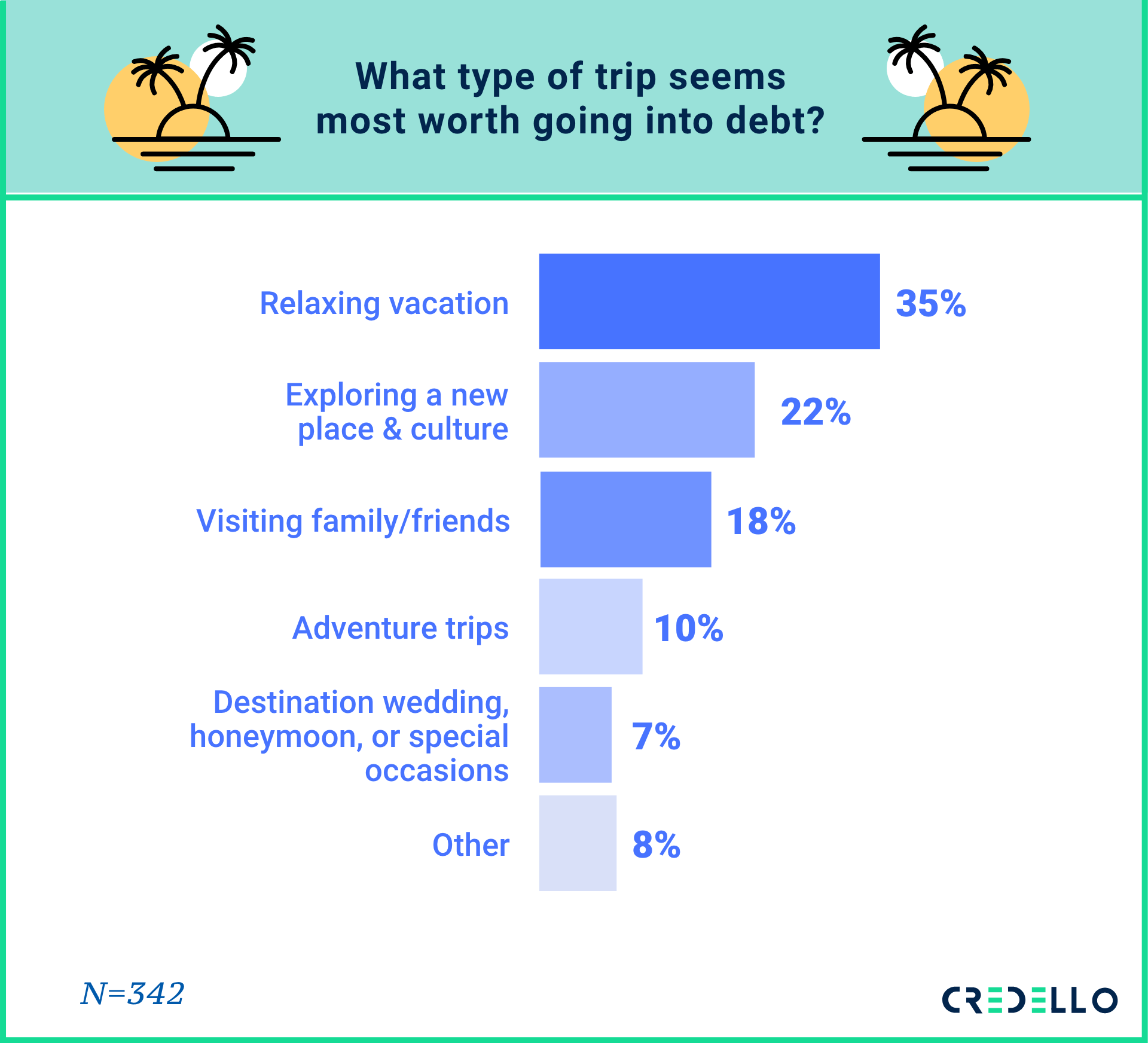 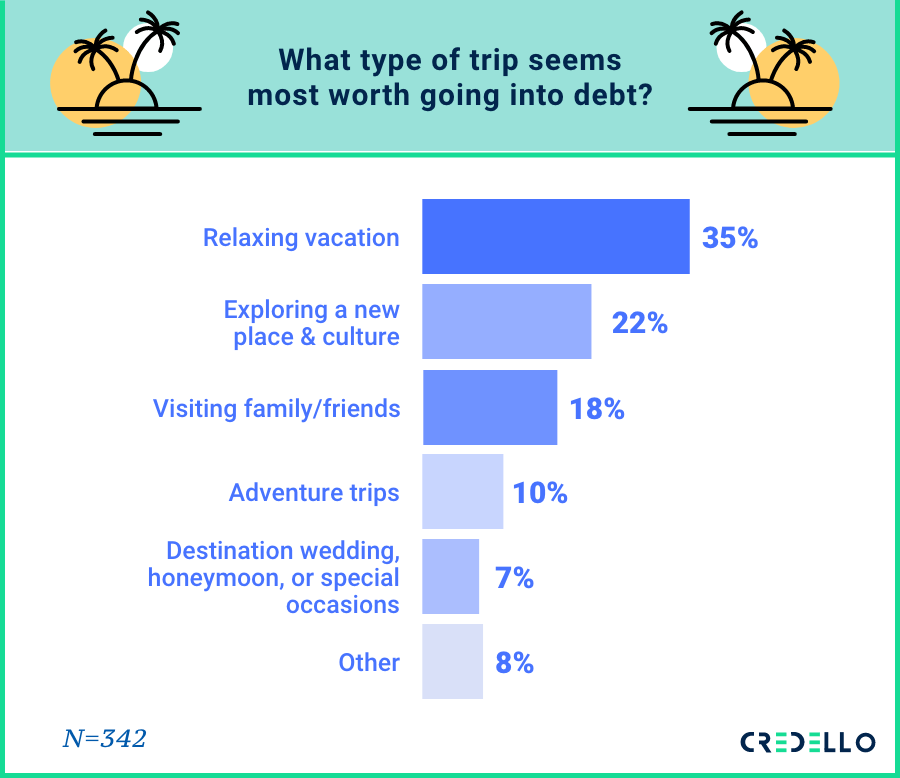 The most common reason respondents were willing to go into travel debt was for a relaxing vacation, with 35% opting for that (makes sense after the stressful 2020 and 2021 we’ve had). Another 32% said they were most likely to take on travel debt for an opportunity to explore new places or cultures, or take an adventurous trip.

Perhaps surprisingly, only 18% of respondents were most willing to go into travel debt to visit family and friends. Vaccines have been available in the U.S. for about six months now, so it could be that many millennials have already made trips to see family and friends and now want that vacay.

Just 7% of people were most willing to go into debt for special occasions like weddings and honeymoons. Totally fair. Even though the divorce rate reached a 50-year low in 2019—there’s no guarantee it’s going to last forever. But your trip to Hawaii and that Spam sandwich will live in your mind till you leave this Earth.

Recommended: How to pay off debt

Staying debt-free when traveling isn’t exactly rocket science. The No. 1 way to do so? Save up ahead of time. Most respondents (68%) said that’s their approach to staying out of debt when planning a trip. Other popular methods included doing a significant amount of planning in advance (54%), sticking to a budget (51%), and hunting for deals (48%). 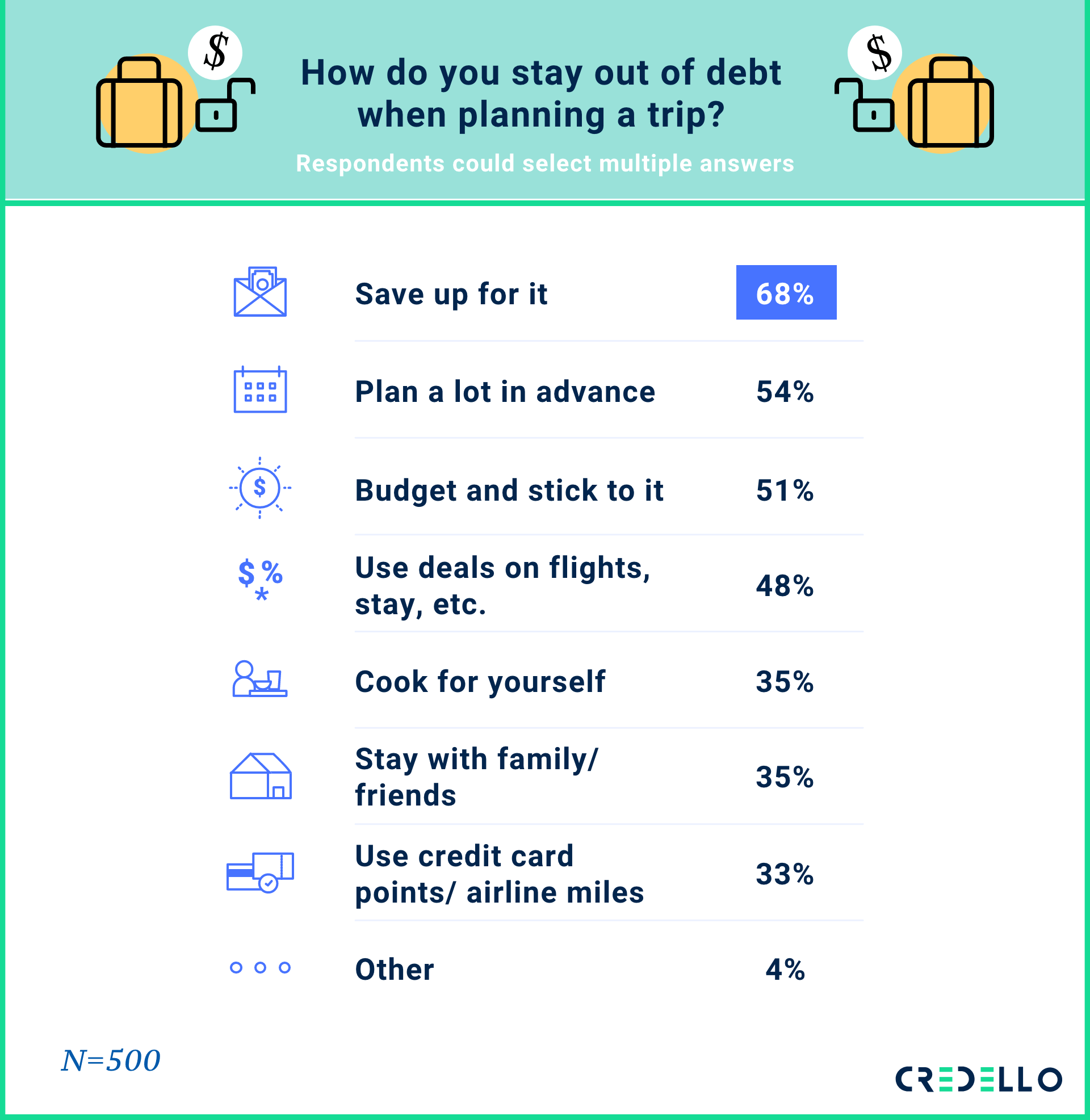 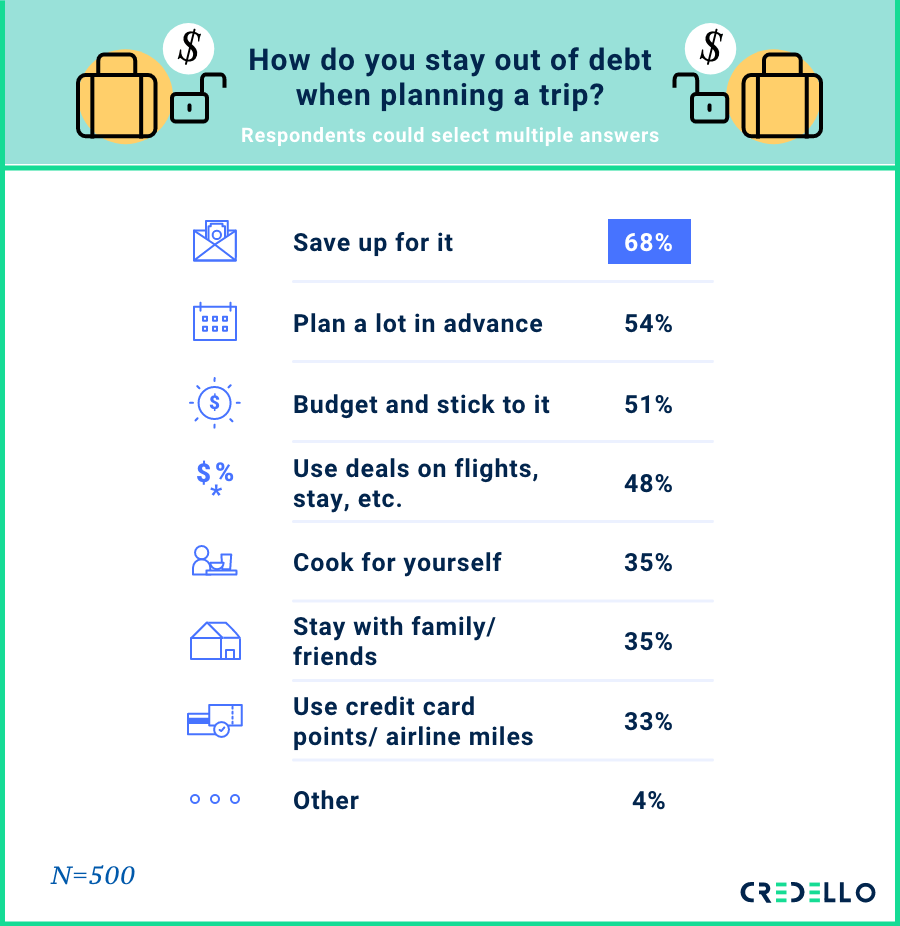 It’s those budget restrictions that can most have an impact on millennial travel plans. According to our survey findings, the aspects that financial limitations hit hardest are destination (63%) and accommodations (62%). But length of stay (55%), when you go (47%), how you get there (42%), and what you do when you get there (32%) also were hindered by budget restrictions. 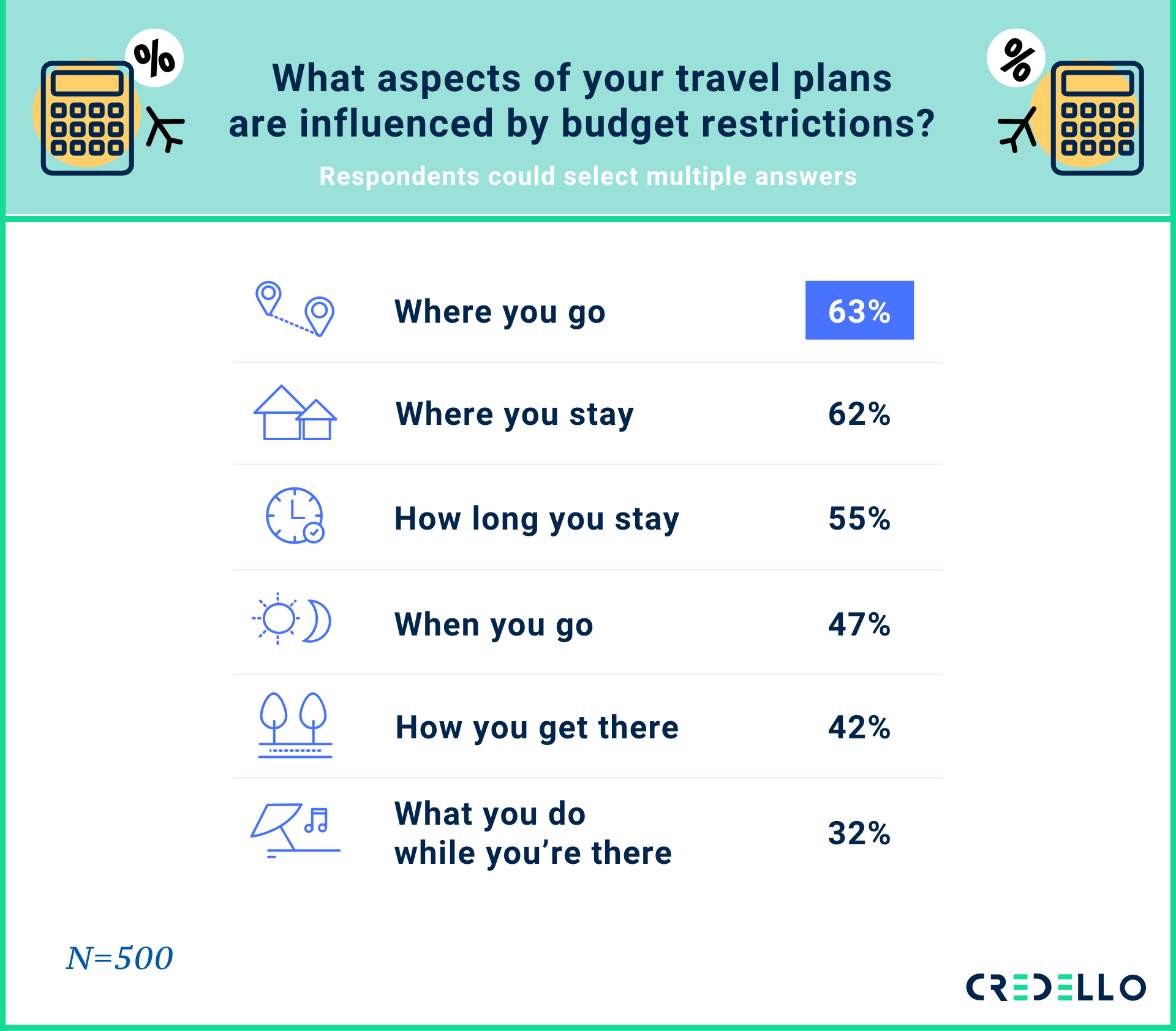 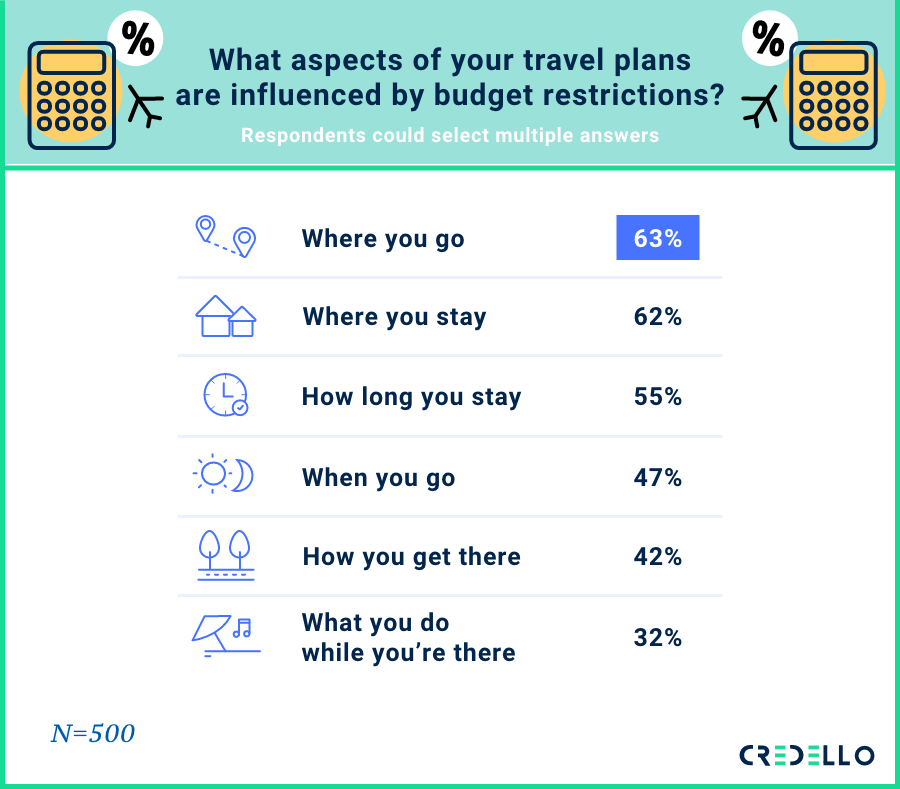 No matter how strict of a budgeter you are, you’re bound to spend the most on something. And for a quarter of millennials, it’s simply getting to their destination (and back) that they spend the most on when traveling. This makes sense as planes are filling back up—no more empty middle seat—and flight prices are at or in some cases above pre-pandemic levels, per the country’s major airlines.

The survey says millennials also spend a decent amount on activities once they’re at their destination (24%), accommodations (20%), and food/drink (19%).

Speaking of mawwiage, those with spouses or live-in partners were more willing to take on summer travel debt than us single folks. If you like it, then you should’ve put a budget on it, amirite?

Among married couples and couples living together, 53% have taken on debt to travel and would again, 21% haven’t but would, and 26% said they would not. (And if you narrow that down to only the married millennials, even more of them have gone into debt to take a summer trip at 58%.)

Divorced and separated respondents are much more likely not to go into debt for summer travel, with 52% saying no way. In case you forgot, getting a divorce is pricey. According to a nationwide survey from legal publisher Nolo, the median total cost for a divorce when hiring a full-scope divorce attorney is about $7,500.

Meanwhile, 40% of single millennials said they would not go into debt to take a summer trip, while 30% have gone into debt for a summer trip and would again, and 30% haven’t but would.

How does that fit with single vs. married people’s usual capacity for taking on debt?

Generally, married millennials have a higher tolerance for debt than singles.

Married folks tend to take the YOLO! approach while single folks lean toward a change of scenery. There are only so many options on Bumble and Hinge in rural Montana.

Traveling with debt AND kids? Millennials are on board

While the overall birthrate in the U.S. was down 4% in 2020, according to federal government data, many millennials became first-time moms and dads during the coronavirus pandemic.

And as the new parents on the block, that’s not holding millennials back from making travel plans, or going into debt to do it.

Single millennial parents were more in line with childless respondents: 59% of those surveyed said they would not go into debt for a summer trip. Surely, they have enough to worry about with keeping food on the table and a roof over their family’s head on one income.

The COVID implications for summer travel in 2021

The pandemic largely hasn’t been a deterrent for travelers, and as younger children become eligible for vaccines, that could increase millennial parents’ desire to travel with their young ones. As of mid-June, 65% of millennial parents surveyed said they are more likely to book post-COVID travel even if it puts them in debt.

Currently, children ages 12 and up are eligible for the Pfizer vaccine under the FDA’s emergency use authorization, and experts say that a vaccine could be available for kids under 12 by September or October—just in time for potential Thanksgiving travel.

The more kids people have, the more debt they are willing to (or expect to) accrue when booking travel.

And that doesn’t account for the increased stress, anxiety, noise, and “stop touching your sister” that comes with traveling with multiple kids.

This survey was commissioned by Credello and was conducted using the online survey platform Pollfish. The sample of 500 millennials (ages 25 to 40) in the United States was surveyed on June 19, 2021. Only respondents who have traveled or are planning to travel this year were included in this study. The results have been weighted to balance responses to census statistics on the dimensions of age and gender.

Work and Money Survey: 1 in 3 Women Don’t Think They are Paid What They’re Worth